CANTERBURY FOAM CONCRETE – WHERE IT ALL BEGAN

The Canterbury Foam Concrete story started in the mid 90’s as a pet project, when Graeme Martin, founder of Canterbury Foam Concrete Ltd, recognized that Foamcrete, due to its flowable nature, would be an ideal product for sealing damp ground under houses. Working from the front lawn of the family home, in South New Brighton, Christchurch, neighbors, onlookers and passer byes (on their way to the beach) would stop and stare in disbelief as a modern day mad scientist produced a thick white foam, spraying it upon the lawn, and over the trees and bushes like a thick blanket of snow, trialing mixes with cement based grout brews.

After countless trials and lab testing a final mix design for Foamcrete was perfected and underfloor ground sealing began.

Canterbury Foam Concrete carried out many hundreds of ground sealing jobs in the early years with Graeme on the hose while wife and co-director Cathie as first hand, operated the pump. Cathie also carried out measure ups and quotes during the early period. Interestingly, as jobs were completed, they were recorded by placing a pin onto a map of Christchurch City which was on the wall of the office, {these were the days before google maps}. This showed at a glance, an interesting spread of jobs across the city and highlighted at a glance some of the damp and more troublesome parts of the city.

Canterbury Foam Concrete was also involved in filling under runners and redundant pipes in the early days as it is still to this day. This type of work has really accelerated in recent years after the Christchurch earthquake period as Foam Concrete has proved to be an ideal, uniquely flowable, fast, efficient, and cost effective product, to fill voids under relevelled foundations, as well as foundations on piles which have cavities that have formed after earthquake settlement. 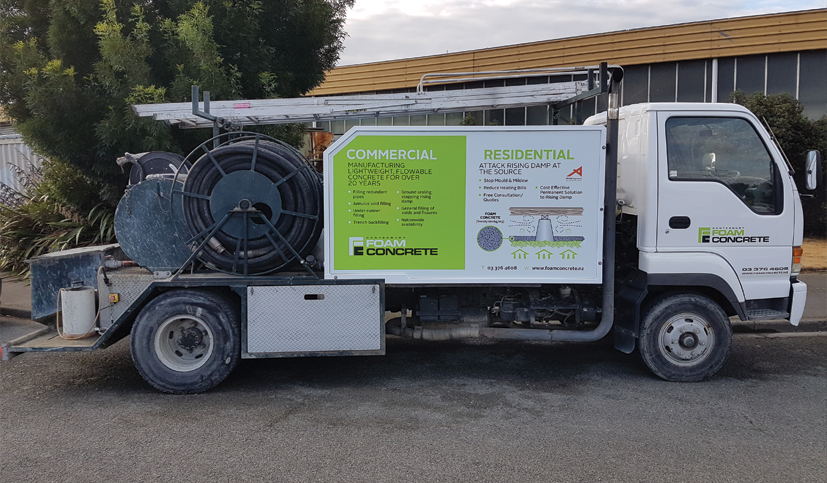 This is our current set up. We have traveled around the country with this truck. We can foam our mix on-site and then pump it as required.

Canterbury Foam Concrete can offer multiple solutions to common civil engineering problems where other readily available and specialist techniques do not compare.

Where to find Canterbury Foam Concrete